I recently had a rather unique opportunity laid out in front of me. I was contacted by the U.S. rep for a Danish pedal company called Lunastone. He asked if I would be interested in trying a new overdrive that was not officially available in the States yet.

Given the depths of my gear addiction, it was somewhat similar to asking a crack head if he’d like to try some new, unreleased, special Columbian, super blend of Ultra Crack. ( That’s a thing, right?) So of course I jumped at the chance. A few short days later the Wise Guy Overdrive showed up. 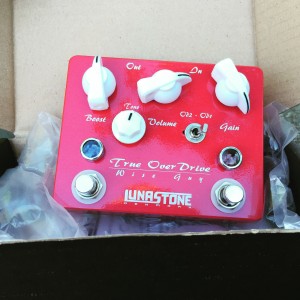 The Wise Guy has a couple tricks up its sleeves. It provides two individually voiced overdrive tones, as well as a very nice, uncolored, 15db clean boost. The boost is placed after the drive and can be used by itself as well as in conjunction with the overdrive signal.

While this is a JRC4558D based overdrive, it brings a flavor all its own by doing away with clipping diodes. Instead, Lunastone has seemingly pulled a page out of the Mesa Boogie handbook and utilized multiple gain stages.

But what does that mean exactly?

The drive tones in this pedal are much more saturated and responsive than many other drives on the market. It’s very compressed sounding, but natural feeling. The notes bloom and react just as you intend them to do. Toggling between the overdrive switches, and adjusting the tone control (which has a wide, usable range) offers excellent compatibility with pickup outputs of all types.

The two different drive tones have some similarities to each other. They both are responsive to your pick attack, as well as your volume control. Both have great singing sustain, and a quick, compressed response. The biggest difference is that OD1 has a little bit more headroom and less overall gain. OD2 offers more saturation, compression, breakup, and a fuller, more harmonically rich tone. Personally, I found OD1 to be more useful for stacking with other drives, and OD2 better as a stand alone overdrive.

The Boost is extremely useful. I found just a hair past noon to be about unity. Any twisting of knobs past that delivers a very open and transparent (ugh, that word again) boost. I know that is the hot adjective at the moment in the pedal world, but it is honestly very accurate in this case. My ears detected no coloration or changed frequencies. Just more volume. Perfect for giving you that extra push when going to melt some faces.

Overall, this is a well made, good sounding and very useful pedal. Did I mention good looking? Just scroll back up and look at that pic. Do it. That is one tasty looking stomp box. Seriously do it. And when they make their official journey over to the states, do yourself a favor and pick one up.

In the mean time, check them out at Lunastone.dk