This is a guest post from Nate with Rogue Guitar Shop. If you have ever spent any time using their chat feature, you have likely been talking to him. Go over there and say Hi for me!

1969 might have seen us put a man on the moon. However, for Jimi Hendrix and many other players, guitar tone had gone intergalactic thanks to a little box from Mike Matthews and the Electro-Harmonix Co. With help from Bob Myer of Bell Labs, Mike gave the world sustain and growl like it had never known; Matthews brought forth the Big Muff Pi. 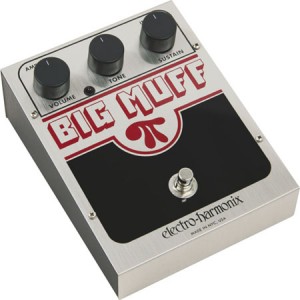 After some time and effort, working with Myer on circuit design, Matthews finally had the sustained, violin-like sound he was looking for: The Big Muff Pi. At the time the Big Muff’s circuit was original and gave players a tone unlike anything they were used to; more of a mid-scooped presence than the “in your face” bright and buzzy tones of the other fuzz being manufactured. Electro Harmonix had done most of their earlier business via Mail-order with their LPB-1 and Muff Fuzz but with a killer new unit like the Big Muff, Matthews took the first ones himself to Manny’s Music in New York and it only took a week before fate had placed one into the hands of Jimi Hendrix. Since then the likes of Gilmour, Kiss, Montrose, the Pumpkins, Metalica, Jack White, Dinosaur Jr., the Black Keys and many more thousands of guitar players have come to love the BM’s classic tones.

Now, I’m not saying that the Big Muff put Electro Harmonix on the map but it definitely put them in the history books. The Big Muff has been everywhere since it’s creation. In fact, it might blow your mind to know that the very first song, with a Big Muff on it, to get serious radio play was the Carpenters hit, “Goodbye to Love”. Yes, pop music put the Big Muff on the radio, not metal or rock…. ugh! that’s a hard one to hear. Another bit of history to consider was around 1982 when the Electro Harmonix company went out of business. No longer were EH’s Muffs hitting the market. This caused a huge outcry for the unit and thus clones started being produced, making the Big Muff the infamous fuzz it is today. Once EHX was back in biz in the 90’s the Big Muff was one of the very first go to’s in EH’s revamped lineup.

I can still remember it… it was the spring of 1994… Just got home from the music store with my copy of Siamese Dream. “Cherub Rock” came on; first the drums and clean guitar, then out of nowhere a wall, a literal wall of distortion comes in and pretty much stays the whole album. That “wall” was Billy’s guitar through none other than a Big Muff. Such an iconic sound from such an iconic box.

Years, decades and even the millenniums have passed but the Big Muff is still as sought after as ever. In fact EHX has near 10 different pedals with the name “big muff” on them. Thanks to some amazing builders there are even some killer clones that have hit the market in the last ten years too!. Here is a look at some modern takes on the classic Big Muff circuit:

Blackout Effectors “Musket Fuzz” – Control is the key here. Blackout doesn’t mess around, they have provided a platform that captures near all the ear’s of Muff fuzz out there. The thing i really love about the Musket is how simple it is to dial in a killer tone… and then dial that tone back in again. Sometimes the older Muff units (like the purple rams head i had) were very touchy and didn’t always provide the same tones when he knobs had been turned but the Musket fuzz will keep you satisfied like no other Muff clone can.

McCaffery “Green Vodka” – the Tone Mob just did a fabulous article on the Green Vodka you should check it out here! However, McCaffery didn’t mess around with this baby. Just like good Russian vodka this pedal goes down smooth. Open and Organic aren’t usually words i use when describing a Muff but the GV sure give you as much as is possible from a Muff. This is a solid choice for the tone-mongers out there looking for a rebellious fuzz that still maintains a lot of your guitar’s character.

Wren and Cuff “Tri Pie ’70” – Straight up and no frills. This is not only a muff, it is The Muff. The guys at Wren and Cuff know their fuzz tones and the Tri Pie is a outstanding version of that classic “triangle muff” tone. The Tri Pie is great with chords or single note lines making it a great choice for the player who isn’t going to turn it off.

As always it is a pleasure diving into the pages of rock history to give you all a taste of what’s out there. Got any questions? hit me up: nate@rogeuguitarshop.com