There is nothing quite like a good tone day, is there? You hit just the right notes and they bloom in just the right way. Everything is full, rich, and just plain gorgeous. It truly is one of the most inspiring feelings that I know of.

But sometimes, my friends, that sound is exactly what you DO NOT want. 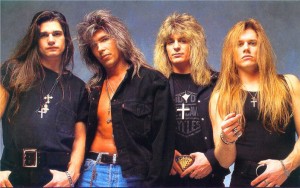 Oh, where you thinking a different Lynch Mob?

Well, before you light me on fire, ( please don’t, I’m wearing my favorite flannel ), let me tell you a little tale.

My band had recently wrapped up recording. All tracks were laid down, libations enjoyed, and jokes cracked. We were prepared to kick back, start on the mixing process. How wrong we were……how wrong we were.

I was in the control room listening to the “final” mix of a song I wrote. It was not right. It sounded flat, and lifeless. There was none of the gritty character I wanted, and the entire track was overly dark sounding. It just sounded empty.

The mix engineer (Hi Leon!) had already been spending loads of time perfecting the album, and had done the best he could with the tracks available. It just wasn’t there yet.

So I did what I always do when I’m involved in a mixing session. Add more guitars!

I grabbed his Telecaster, a Fulltone OCD, and EQ’ed a modded BC30. The result was a fairly heavily distorted, loud, VERY BRIGHT tone. We are talking borderline ice pick level of treble. Quite frankly, it didn’t sound very good.

But it sounded AWESOME in the mix. That horrible tinny, nasty track rounded out the song and brought it to life.

Another thing we did in recording (all this applies to live performances as well), is analyze the gear the others in the band were planning on using, and use something different. If one guy is playing a telecaster, then I might choose a P90 equipped guitar, or a 335. Anything to avoid stepping on his frequencies. If other guitars are not available, try switching to a different pickup position, or rolling your tone off slightly.

The key takeaway here is to listen to the rest of the frequencies in the song, and fit in that groove. Find the gap in tone, and wedge your sound in there. The guitar may sound awful on its own, but it will fit in the mix and make the overall track sound full and rich.