After teasing us with mysterious pics and hints for the last few weeks, Mr. Black Pedals has formally announced the Shepards End Infinite Flanger. 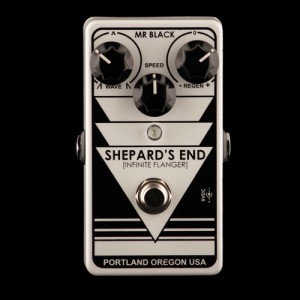 According to Mr. Black, this is the first time this effect has ever been produced. By anyone. Ever

But what is an Infinite Flanger? I’m not even going to try to explain. Mr. Black lays it out like this:

“So what is a ” barber pole through-zero flanger?”
Well, essentially, the Shepard’s End is a flanger, but its unlike any flanger you’ve ever heard, played or experienced. While the term “Barber Pole” sounds neat-o-speed-o, what it really means is that this flanger does not have a beginning, or an end to its cycle. WHAT?!

You know how most flangers go up, then back down? Well, this one doesn’t do that. Nope. It goes up, continually. It goes down, continually. It can even go through the zero-point (that amazing over the top wooshing sound you hear on so many records), continually. This just depends on how you set the controls. And they’re pretty easy to use.

As if that weren’t enough, you get both positive (swishy, phaser-y sounds) and negative (tubular, hollow, sucking-into-itself sounds) regeneration control. Or, just raw through-zero flanging at its finest as you have heard on so many recordings.”

Go check out the teaser video and preorder this bad boy right HERE.